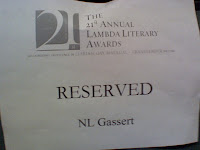 It’s been a week now since my adventure in New York, and that means it’s high time I tell you about it. First, just in case you haven’t heard or seen, I didn’t win the Lambda Literary Award for Gay Romance. Bummer. (Check out the winners here.)

The very first time I got excited about the Lammies was the day Ken Harrison, my publisher, called to let me know that THE PROTECTOR had made the finalist’s list. How awesome was that?! The second time I got really excited was the day I received my ticket in the mail. But the big excitement didn’t happen until I slipped into my red gown and walked into the lobby of the W – The Tuscany, waiting for the car to take me to the Proshansky Auditorium. I was so nervous I forgot to put lipstick on!

So there I was, no lipstick, in my beautiful red dress, horribly nervous. I don’t think I’ve ever been that nervous. I was shaking I was so nervous. Of course, it really didn’t help that I didn’t know anybody at the reception. Walking into a room full of strangers is a nerve-wrecking thing all on its on. Walking into the Lammies …

But I met some awesome people right away. Joseph Lund and his partner. Ruth Perkinson and her family, who made sure I didn’t feel too lonely, standing all by myself. Thank you. Josie Gordon and her partner Jen. Charles Flowers.

Once Ken Harrison joined me, the two of us having a glass of wine to calm our nerves, the party started looking up. It’s so much easier dealing with a group of complete strangers when there’s someone at your side. We shouldered our way through the many groups of talking people and at one point I introduced myself to a complete stranger! Remember I’m shy and introverted 🙂

We spoke shortly with Drew Ferguson, met Laura Baumbach and Victor Banis (I wish I’d had more time to chat with Victor) and circled the room hoping to catch up with Larry Duplechan.

We met Larry and his husband Gregg. I assured Larry I thought he was going to win our category. And I wasn’t just saying that. He paid me the greatest compliment. He said he’d thought I was a man. Now there’s only a certain number of times a woman in a red gown (even without lipstick) is thrilled to hear she’d been mistaken for a man, trust me. But how awesome is it that a gay man read my book and didn’t spot the fact that its writer was a heterosexual woman right off?

Neil Plakcy joined our conversation and it was awesome to finally meet him in person. Thanks again, Neil, for blurbing my book and not laughing at me when I first approached you, thinking you were completely, utterly out of my league.

Back to the Lammies, which in my limited experience felt like the Oscars. At this point I had no real expectations about winning or losing. I knew I had done a good job, but I also knew the other authors had great books. It was all up to the judges and their taste this year. I had a solid 1-out-of-3 chance of winning.

Once inside and seated, I was dying of nerves. I was terrified, let me tell you. The idea of having to get up on stage to accept an award and give a short thank-you speech was truly horrifying. I was so nervous, in fact, that I didn’t want to win. There was just no way I wanted to go up on that stage.

Next time I watch the Oscars and see the winners tremble, seemingly unable to form coherent sentences … I totally know what that feels like. I can sympathize with the overwhelming terror/joy/surprise.

I was so relieved when Felice Picano who commented on THE PROTECTER’s awesome cover announced Larry Duplechan as the winner of Gay Romance. Ohmigod was I relieved! Honest. I wasn’t disappointed or bummed; I was relieved and happy as hell to have missed out on the whole going on stage thing. Whew.

Would I have loved to have gotten the award? Yes, absolutely. But was I bummed? Nope. It’s been a week now and I’m still feeling very honored to have made the shortlist of finalists with my first book. I’m incredibly grateful to my readers and the Lammy judges and super proud, but mostly I’m still relieved that I didn’t have to go on stage 🙂

I’ll be better prepared the next time. Heck, I might even wear lipstick then.

Some other nice people I met that night: Scott Heim who won for Gay Fiction and used to live in Kansas. Scott Sherman whose debut won Gay Mystery. Anthony Bidulka (ohmigod!). John who writes as Jospeh Pittman. I said a brief Hello to Nicole Kimberling before she won LGBT Sci-Fi/Fantasy/Horror, because we both wore a red dress in a sea of darkly-dressed people.

Other odds and ends: Working on a full-sized laptop on an itty bitty plane … interesting. I basically had the keyboard tucked under my chin. I thought long and hard about taking the laptop, but I figured I could use the downtime, also known as waiting in the airport, to get some actual work done. It wasn’t until the guy in the seat next to me turned on his laptop and I saw a cute picture of a small kid plastered across his screen that I realized I would power up to a naked guy on my desktop. Oops. (And yep, I totally fired that machine up.)

There are young women in New York City walking around with their dogs in the crook of their arms. How they balance on those heels with a canine drapped over their arms …

There are attendants in the FAO Schwarz bathrooms. If you’re feeling nauseous and faint, possibly a left-over from all those nerves from the night before (not the drinking, because you only had one drink), you might not want to seek out an FAO Schwarz bathroom. Spending the day walking the halls of the Metropolitan Museum of Art might not be ideal either.

Observing a traditional Aoteraroan greeting—forehead and nose pressed together, breath exchanged—made me homesick for Hawaii, but attending Matariki New York 2009 was way cool. Matariki was a celebration of Pacific Island diversity, featuring music, dance and poetry from New Zealand (Aotearoa) and the Cook Islands. The Kahurangi Maori Dance Theatre performance was OUTSTANDING. 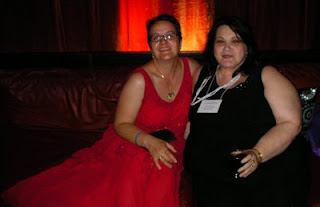 Laura Baumbach (right) and I, courtesy of the wonderful Neil Plakcy