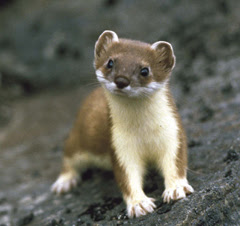 This little guy is Riley.

Riley is the protagonist in a short story I’m working on. It’s an urban romantic suspense short, complete with vampires and familiars and bad guys with big guns. Oh, and sub-zero temperatures in .

Riley is a stoat a.k.a. a short-tailed weasel. He’s a familiar (you know, like a witch’s black cat). He also has profound sensorineural deafness (he’s completely deaf), which makes him a challenge to write, because there is no dialogue in the traditional sense. Not that that bothers Riley in the least, he’s a very opinionated young man and has plenty to say.

Riley stole all my time the last two weeks. I learned about the differences between stoats and weasels and spent hours looking at sign language clips on youtube. Riley uses American Sign Language (ASL), but I found a British Sign Language (BSL) video I really love. Click here. Watch it at least once with the sound muted.

Also, when you’re over there on youtube, check out Keith Wann; he’s very funny.