Skip to content
I knew I was going to watch this movie when I first saw the previews. The Pearl Harbor, Oahu, HI, location. Taylor Kitsch and  Alexander Skarsgard. Explosions. Action. Sure, I was in.  Imagine my surprise and excitement when I heard there was going to be a free preview screening at the Pearl Harbor movie theater. I made plans. I told my island friends, Renee (see her write-up here) and Kim (who couldn’t make it). I called the babysitter and talked the husband into coming, too.
The box office opened at 4pm. Four hundred lucky people were going to get a ticket. After having circled the block a few times (“Where the hell is this place?”), I made it to my spot in line shortly after 1pm. There were a dozen or so people in front of me. I had a good time chit chatting with Renee about writing, romance tropes and movie clichés until around 3pm, when someone mentioned that active duty soldiers had to be in uniform to be seated for the movie. There was conflicting information, so I asked someone at the theater and sure enough, active duty personnel was required to wear their “nice” uniform. I called the husband who wasn’t thrilled. Turns out, part of his good uniform was at the dry cleaner’s. We weren’t happy. I was really bummed and disappointed. (So was the babysitter.) 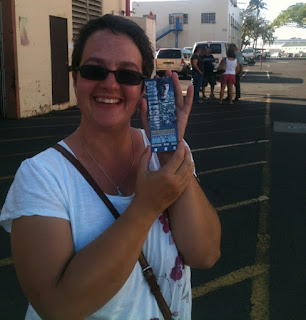 Someone said Rihanna might be in attendance. I didn’t believe it. Yes, she’d been on island, touring Navy facilities, so it was a possibility she could show up. Truth be told, Rihanna being there or not being there did nothing for me. I told Renee I wouldn’t mind getting a good look at Taylor Kitsch. Renee would have preferred Alexander Skarsgard. I admitted I’d had a really bad teenage crush on Peter Berg way back when.
After more waiting and me getting lucky with parking for a second time that day, we finally made it inside the theater around 5pm and waited some more. Oh, and wouldn’t you know it, there was at least one soldier in his everyday BDUs. My husband totally could have come! I was MAD.
Shortly after 6pm, an official announced we were running late because Peter Berg was on his way. Yay! Excitement! Maybe I should have worn a nicer shirt? Sexier underwear? Different shoes?
In the few minutes we had left, Renee taught me how to use the camera on my phone. I’m so tech savy and hip …
Finally, the big moment. Peter Berg. It was awesome seeing him on stage. He was gracious and funny. He said the movie would be loud and oh, hey, “I brought some friends.” Out comes Rihanna. She’s very cute in person, but still does nothing for me. Out comes Taylor Kitsch and I’m in fan heaven (look, Laurie, it’s Remy Lebeau!!). Peter Berg introduces Brooklyn Decker (the obligatory blonde love interest), then makes Renee’s evening and has Alexander Skarsgard come out on stage. We clap, we go nuts. We love it. When, last but not least, Lieutenant Colonel Gregory D. Gadson, a real-life Army hero (Hooah!), was introduced to the crowd, I didn’t know who he was. 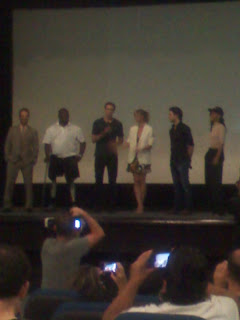 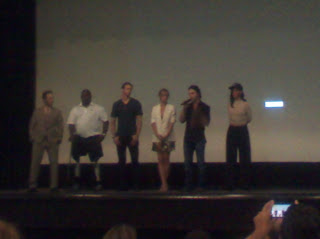 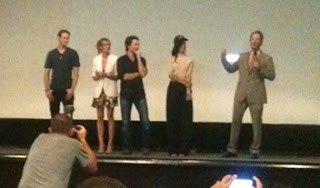 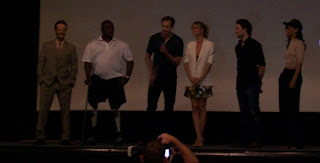 Each of the actors had a chance to express their appreciation and wish us a good movie experience. I’m glad I learned how to use the camera phone. [Thanks, Renee, for allowing me to borrow a few pics from your site.]
Finally, the movie.
I enjoyed the movie a lot. I can recommend it. Peter Berg didn’t lie; it was LOUD, very LOUD. It was awesome to see Hawaii front and center. And I totally agree with Renee that BATTLESHIP obviously honors our military men and women and their sacrifices. We cheered and clapped like only a military audience can. We laughed and gasped and nodded in the right places. This was why I wanted to watch the movie at Pearl Harbor; the experience is totally different when you’re in the room with 400 people who do this kind of action-hero stuff for a living (whether first-hand or through the family member experience).
The movie: I liked it. Don’t let the first few slow minutes turn you off. We get to know everyone and their circumstances pretty quickly and in come the aliens! Yes, they show up a little quickly, it’s only been a few years since the message was sent, but hey … Taylor Kitsch is thrust into a reluctant leadership position. He does comedic action very well (the chicken burrito stuff was pretty funny; I’m still chuckling). In case you were wondering: Rihanna did a  great job. Kudos to her.
Berg’s use of the ships as characters, not props or background, was an excellent choice. While the movie is naturally Navy-centric (those boys look good in their Whites, no doubt about it), there were a few Marines out on Kaneohe and real-life hero, Army vet COL Gregory Gadson who’s a West Point graduate and lost both legs above the knees in Iraq in 2007.
The Battleship-the-game scene was well fitted and placed, thought I have my doubts about younger audience members ever having played the game.
The geeks did their comedic stuff just right. “Acquiring courage” may become my new catch phrase.
Hopper being recruited by the Seals at the end was a nice little touch, too. I hope he goes for it.
What may have gotten lost a bit, it only occurred to me after the movie, was the fact that the aliens were not the aggressors. Their considerable firepower and destructive might was brought to bear in defense.
All in all, a LOUD, fun pre-summer blockbuster that requires a certain amount of suspension of disbelief but has a killer soundtrack, great FX, solid acting, real-life vets and the best ship “skidding” scene ever.
Stick around until the credits have rolled, there’s a bonus scene.
PS. To the critic who suggested the a bunch of veterans just hanging out at the Mighty Mo was an out-of-left-field deux au machine moment: dear Sir, those gentlemen actually do hang out at the Mo on a daily basis, they wear nametags that say Volunteer, they chat with the tourists, they reminisce, and if you let them they’ll tell you stories from their day in the Navy.