I started writing again. In fact, it was right around this time in 2011 that my self-imposed writing exile came to an end. What kept me from writing all this time? I’d like to say my struggle with depression was a major contributor, but it would probably be just as correct to say that my non-writing was a major source of my depression. They certainly went hand in hand. My failure to produce a finished STALKER, the sequel to THE PROTECTOR, weighed heavily on me, too. It wasn’t until just a short while ago that I considered my writing career completely stalled, which didn’t do much to lift the lingering effects of my depression either.

In fact, it wasn’t until my very good friend and writing buddy agreed we needed to get some stuff published that I realized not only had we written and finished a contemporary novella, but we were nearing the end of our paranormal novel.
Holy cow, not one, but two writing projects, conceived and written through e-mail and instant messages, both untitled as of yet: 100,000 words written between diaper changes, cooking meals, doing housewifely things and, in my case, homeschooling.
Neither my friend nor I started writing with an eye toward publication. We just needed something to keep us busy and from going insane. It wasn’t really until the second half of the year, when we were both becoming increasingly frustrated with what the published world had to offer. Dang it, we weren’t even trying and we were doing better than some of those (self-pubbed) authors. Why not publish our stuff?
I’m quite happy to say that I think we’re ready to set out on the road to publication (after major edits). I may not have written the book I was trying to deliver for some years now, but I created two new characters every bit as fun as Mason Ward and Soren Buchanan (who will have their sequel told one day, for sure; it’s half written after all): the somewhat impulsive Journey Pendergrast and my most silent-waters-run-deep character yet, Anson Ardley whose first name was inspired by Xavier Axelson’s EARTHLY CONCERNS.
Hang around and maybe you’ll find those two and their love interests on your favorite tablet or e-reader sometime in the not-too-distant future.
2012 also brought a new addition to the family: Texas, the terrier-mix puppy, whom we rescued from the Honolulu Humane Society. Texas is an awesome dog. I like to call her a love-bug. She’s very affectionate and great with Ivy. She doesn’t mind the cats and is absolutely ball-crazy. We couldn’t have picked a better dog. Naturally, she’s a redhead. 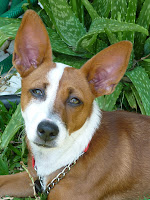 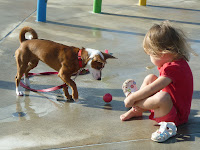 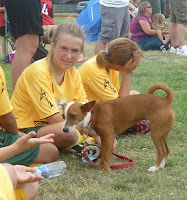 My cousins from Germany and France came to visit in the second half of the year and that was a lot of fun. It was so good to see family again. It’s been a while. Living in paradise does not make for cheap or easy travelling back home. 2012 also saw my parents Skyping for the very first time. We do talk on the phone regularly, but it’s so much nicer when you can look the other person in their grainy eyes. My parents saw their third grandchild live and in action for the very first time and Ivy, I am happy to report, loves talking to Oma and Opa on the computer. 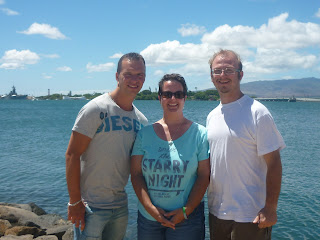